Hole in the Urinary Bladder

This is an unfortunate story of a woman whose life became miserable due to the most basic privilege of any lady of her age. While she was in labour during child birth, she did not receive adequate medical help resulting in what is technically called ‘Obstructed Labour’. In simple words, it means that the head of the unborn fetus gets stuck in the bony pelvis of the mother. As a result of this, the tissues of bladder get squeezed between the head of the fetus and the bone of the pelvis leading to ‘necrosis’ or breakdown of tissues. Consequent to obstructed labour, Mrs. S developed a hole in her urinary bladder (Vesico vaginal Fistula, or VVF) and started leaking urine continuously. She underwent three operations to close this hole in Gujarat, but unfortunately she continued to leak urine causing unabated physical and mental agony.

When Mrs. S came to PSRI hospital, she was diagnosed to have what is technically termed a persistent VVF. After examination and suitable investigations, Dr. Rajesh Taneja, senior consultant Urologist decided to take up the challenge. Mrs. S underwent a tedious abdominal surgery, made difficult due to previous operations, and lasting almost 6 hours. But at last, this was the end of miseries for Mrs. S and her family.

Vesicovaginal fistula (VVF) has been one of the most unfortunate accompaniments of the virtue of procreation bestowed upon womanhood. It has been known to have occurred in royal family of Egypt as long ago as 2050 BC, having been preserved as a mummy. Not very long ago, Princess Charlotte, daughter of George IV of England succumbed to obstructed labour in 1817. According to WHO report on Global Burden of disease study, obstructed labour affects at least 7 million women every year out of which 6.5 million belong to underdeveloped countries. If only 2% of these obstructed labours result in formation of VVF, then every year 130,000 women are being affected by this dreadful complication. There are no widespread true cross sectional studies from India to determine the incidence of VVF. According to the UNFPA report presented at the South Asia conference for the prevention and treatment of obstetric fistula held at Dhaka Bangladesh in 2003,a summary of various surveys reported an incidence of VVF being 0.3 – 0.5% among selected pockets of population.

A patient with urinary fistula is in a miserable state as more often than not she has been socially isolated and physically frustrated trying to save the most tender portion of her skin from ammonia dermatitis and contain wetness. A multi dimensional holistic humane approach will go a along way in healing these individuals.

Surgical closure of the fistula is successful in about 90% of cases during the first repair in the best of hands. The prognosis worsens steeply if there have been any previous attempts at the repair. The biggest challenge in developing countries is, of course, prevention of obstetric fistulae. 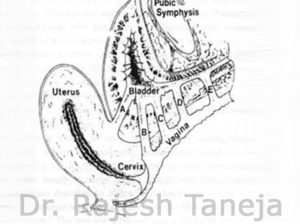