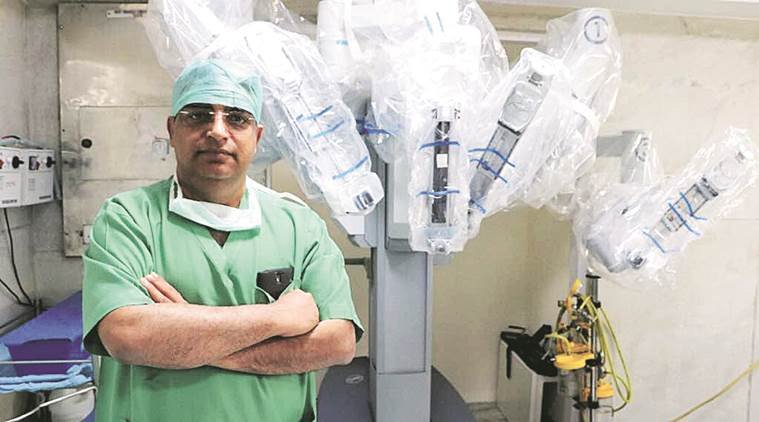 Standard treatment of patients with coexisting cardiac and non-cardiac diseases includes two separate operations.  However, if the cardiac operation is performed first, the oncologic treatment is delayed, jeopardizing the oncologic outcome. Furthermore, the immunosuppressive effect of extracorporeal circulation may accelerate tumor growth and disseminate cancer cells. If oncologic procedure is performed first, the risk of operation is very high due to compromised cardiac status. There is also an aspect of risk and cost of two hospital stays and additional anesthesia.

Till now there have been just few publications on one-stage cardio-urologic operations and there are no reports concerning patients with combined coronary artery bypass surgery and urologic tumor.

Seventy two years old man, (height 1,78 m; weight 70 kg) presented to our tertiary care centre with a diagnosis of right renal mass lesion extending into renal vein, Inferior vena cava (IVC), up to right atrium (RA). This had been found during evaluation for low grade fever of 6 months duration and weight loss with no urological complaint. He had a preexisting diabetes mellitus and coronary artery disease. He had undergone myocardial re vascularisation procedure in the form of PTCA 5 years ago and had two coronary stents in situ.

Under intubated general anesthesia, through anterior midline abdominal incision, transperitoneal approach, the duodenum was reflected medially and to the left to expose the left renal vein and right renal artery. The right renal artery was ligated in continuity at its origin and the left renal vein was secured in a vascular loop. A loop was placed around the IVC below the renal vessels. At this stage, through a median sternotomy, CABG was carried out on beating heart.  Following this,the patient was brought under heart lung bypass machine with hypo thermia. At this stage a racquet shaped incision was made on the IVC, encircling the   right renal vein. The thrombus was meticulously pulled out of the IVC  in its entire length. After an initial resistance , the thrombus came out as a single piece in continuity with the kidney specimen. The radical  nephrectomy was completed by dividing the renal artery and excising the kidney in extra fascial plane. Incisions were closed with after careful homeostasis over an abdominal and a thoracic drain.

18 hours post operatively , the patient required re exploration through thoracic and abdominal incisions due to fall in hemoglobin and persistent hemorrhagic drain out put both from abdominal and chest drains. No definite bleeder could be identified but there was some diffuse ooze in renal fossa. the incisions were closed and the patient recovered well post operatively and mainatained hemoglobin and hemodynamics. He was extubated 24 hours after reexploration and steadily improved thereafter. He was discharged on 12th post operative day. Histopathology revealed RCC, clear cell carcinoma with Fuhrman grade 2, T3c, N0M0.

Cardiac part of operation was performed first. Chest was open through median sternotomy and cardiopulmonary bypass (CPB) was established by cannulation of both venae cava and ascending aorta. After clamping the aorta heart was stopped by cold blood cardioplegia,CABG done for three vessel disease..

The second part of the operation was carried out by Urologists,right radical nephrectomy through laparotomy ,venotomy to remove thrombus which was extending upto right atrium

To the best of our knowledge, this is the first reported case of patient, who underwent one-stage radical nephrectomy with thrombectomy with CABG. The aim of this report was to prove the possibility of simultaneous difficult cardiac and urologic operation. The most important point of our report concerns the fact that the oncologic treatment was not delayed despite severe heart disease. There is also an advantage in avoiding second operation and hence anesthesia. Essential disadvantages, which have to be considered are as follows: increased probability of bleeding due to heparinization, operation time, its complexity and risk of patient’s death.

One-stage cardiac and uro-oncologic operation can be a safe and beneficial procedure, if performed in selected patients by experienced cardiosurgical and urological teams. There is a need of greater number of patients and long term follow-up to establish final conclusions.