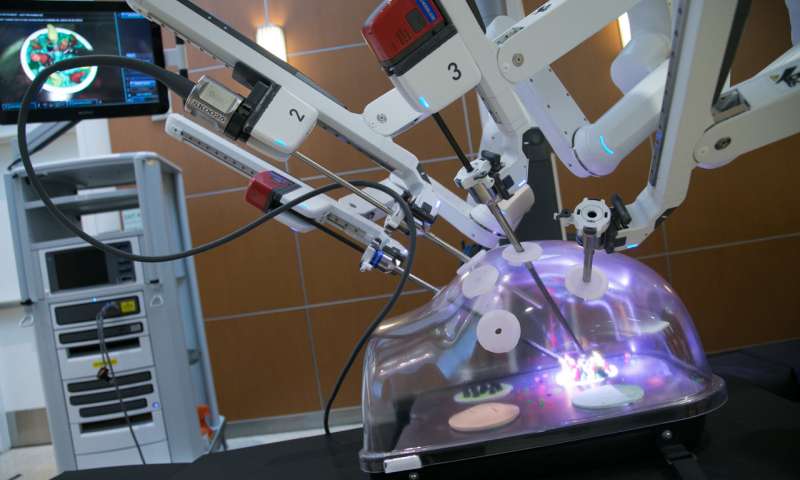 Partial nephrectomy for small volume renal cell carcinoma is the treatment of choice. This procedure can be carried out safely and effectively by open, laparoscopic or Robotic assisted procedure. The warm ischemia time of kidney during the clamping of vessels is inversely proportional to the speed of effective and hemostatic  renorrhaphy. Robotic technology offers an opportunity to place quick and effective sutures, thus reducing the warm ischemia time , allowing early declamping of renal vessels.

Between October 2012 and July 2015, 16 cases of renal cell carcinoma were advised  partial nephrectomy. Seven patients were male, and 8 patients had tumours on left side. After suitable counselling and discussion regarding probable outcomes, Robotic assisted partial nephrectomy was carried out successfully in all patients except one, in whom bleeding from the main renal vien on right side led to conversion to radical nephrectomy early in the series. In first 8 cases, both renal artery and vein were clamped while in later cases, only artery was clamped. Mannitol was given before clamping the artery. The tumour was excised using scissors and the defect was repaired in two layers. The medulla was repaired using 3’O V-lock (Absorbale barbed) continuous suture. Cortex was reconstructed using interrupted 1’O vicryl sutures buttressed with Hemolok clips. All patients were discharged once they passed flatus and were accepting soft diet.

Intra operative blood loss was minimal and none of the patients required blood transfusion.  Mean warm ischemia time was 18 minutes. Average length of stay post operatively was 40 hours.  All removed specimen contained renal cell carcinoma. There were no positive surgical margins. All patients had an oncologically acceptable outcome with minimal morbidity. Follow up CT scans have shown no local recurrence or distant metastasis.

Robotic assisted Partial nephrectomy in selected cases of small volume renal cell carcinoma can be seen as an emerging standard of care.