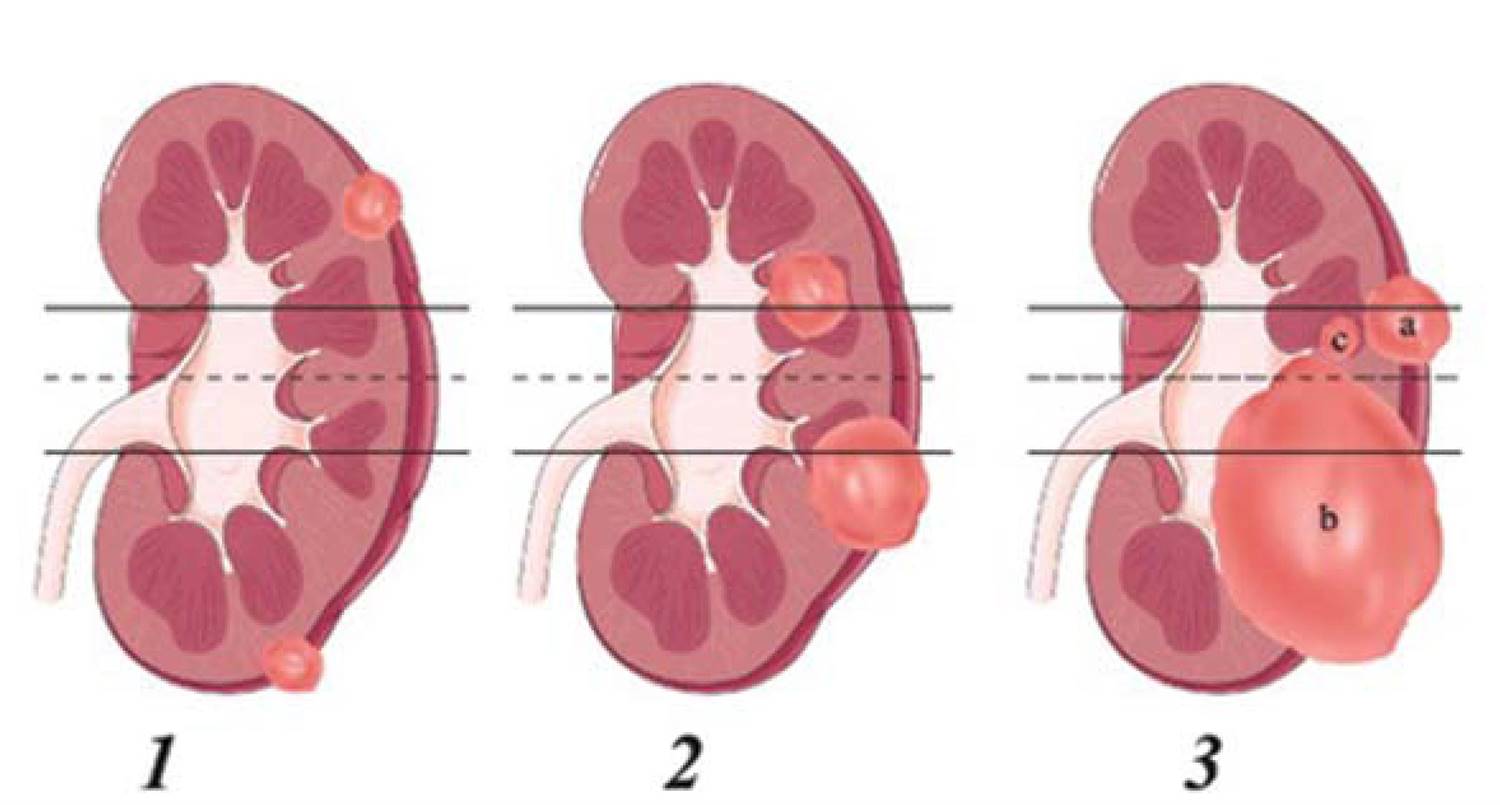 The increasing radiological detection of histological low grade low stage renal masses has presented a challenging task to the practising urologist. Nephron sparing surgery (NSS) not only preserves the kidney but also allows safe removal of tumour of unknown malignant potential without removing the kidney. Advent of robotic technology and evolution of surgical technique together have offered to serve patients with these tumours, a large number of which are asymptomatic at the time of diagnosis. Centres which have the facility for robotic surgery have been offering partial nephrectomy to patients with more and more challenging nephrometric scores. On the other hand radical nephrectomy is being offered to a large proportion of patients with tumours otherwise suitable for NSS.   Advances in technology like firefly and intra operative real time ultrasound have further refined the technique of robotic partial nephrectomy.

Renal Cell Carcinoma (RCC) is the commonest malignant neoplasm of the kidney and almost 200,000 new cases are detected annually and half of this number succumbs to this disease. The advent of ultrasound screening for unrelated abdominal symptoms has shifted the stage of diagnosis from a delayed stage to early, asymptomatic, localized disease, in which the treatment can be safely directed towards Nephron Sparing Surgery (NSS).  It has been amply well documented in the last decade and a half that the oncological outcome of NSS or Partial Nephrectomy (PN) is equal to the earlier gold standard of Radical Nephrectomy for localised small volume disease, stage T1 ( 1). This approach has been shown to be superior to radical nephrectomy in terms of long term development of renal impairment, cardiovascular morbidity and premature death in addition to psychological rehabilitation of patient with the thought that part of the kidney could be saved (2).

Nephron Sparing surgery was initially popularized by Andrew C Novick.   In the beginning, it was a tedious operation through a large abdominal incision with or without intracorporeal cooling. As the experience advanced, the cooling was given up with equally good results of NSS.  This was the time when laparoscopy was beginning to gain popularity among urologists and the pioneers in the field introduced the concept of NSS through laparoscopic approach, thus reporting successful laparoscopic partial nephrectomy (LPN) (3). Various techniques of renorrhaphy were described and the surgeons continued to follow the one they were most comfortable with. Laparoscopic NSS offered distinct advantage of reduced peri operative pain, hospital stay and estimated blood loss (4). The main problems with LPN were the steep learning curve even for the urologists familiar with laparoscopic skills, and a need to curtail warm ischemia time to 20 minutes.

Although literature was abound with evidence in favour of NSS, not many suitable tumours were being treated by partial nephrectomy due to disadvantages of both laparoscopic and open NSS as mentioned. Robotic technology has given a thrust towards nephron sparing surgery by offering the advantages of minimally invasive procedure with a shorter and less steep learning curve compared to laparoscopic operation and the oncologic benefit of open partial nephrectomy. The learning curve for RPN is shorter than laparoscopic procedure (5). The three dimensional high definition camera, wristed small calibre instruments, wide range of movements and scaling of surgeons movements offer definite advantages over conventional laparoscopy. Evolution of technology like ‘Tile Pro’, i.e. image in image technology for intra operative imaging, Indocyanin Green, the illuminating vascular contrast using ‘Firefly’ technology, and barbed sutures have changed the technique of Partial Nephrectomy. The technique of renorrhaphy done robotically offers to reduce warm ischemia time when compared to laparoscopic procedure (6). Warm ischemia time for remnant kidney should ideally be less than20 minutes. However electron microscopic studies have shown that the up to 60 minutes of warm ischemic time can result in return of function without discernible damage to the remnant kidney. Indocyanin green when injected intravenously by ‘Firefly’ technology can help to identify the arterial supply to tumour. In some cases, this can help in selectively clamping the segmental artery, resulting in reduced ischemia to rest of the kidney (7).

The centres which acquired Robotic technology are doing more and more partial nephrectomies as compared to those in which open or laparoscopic procedures are being carried out. Studies have shown that the incidence of conversion to radical nephrectomy or open surgery is much more with laparoscopic procedure when compared with robotic (8).Various nephrometric scoring systems have been evolved which attempt to predict the feasibility of Robotic Partial Nephrectomy (RPN), one such popular score is R.E.N.A.L. Pictorial description of this system has been provided in box (9). However, this is only a guiding system and does not set any rules.  All that can be predicted by these scoring systems is the ease or difficulty that might be encountered during RPN. As the experience is mounting, more and more surgeons are attempting to perform RPN which were once thought to be difficult. Entirely endophytic tumors have been shown to be amenable to RPN (10). Advocates of partial Nephrectomy in tumours lager than seven cm diameter argue that one must still offer partial nephrectomy because the foot prints of metastasis would already have occurred and therefore whether a partial or radical nephrectomy is performed, the overall outcome is unlikely to be different (11). Hence giving the benefit to the patient, one should offer partial nephrectomy to such patients.

Renal cell carcinoma is resistant to both radiotherapy and chemotherapy. Therefore one should strive to achieve a complete oncological clearance while performing partial nephrectomy.Robotics adds to the advantage of dynamic imaging like intracorporeal ultrasound imaging. The ‘tile pro’ function in robotic console is a real boon to reduce the tumour positivity of resected margin However, tumour positive margin as reported in an excised specimen has to be viewed in light of the intra operative findings.  All margin positive cases should be discussed at length with their family members and an option of radical nephrectomy must be offered. Various studies have included patients with positive surgical margins, who have been followed over years and remained recurrence and metastasis free, thus providing evidence in favour of safety in not being treated as radical nephrectomy (12) in some of the selected cases.

It is generally wise to clamp both renal artery and vein, but lately, it has been shown that only arterial clamping offers reasonable haemostasis and the kidney remains perfused with venous blood which is better than total ischemia (13). If both artery and vein have been clamped, and while excision of tumour bleeding is encountered then it is wise to unclamp the vein, which may drain blood from renal parenchyma, which might be engorged due to an unclamped arterial twig.

One of the troublesome problems that can occur if the calyceal system is not closed meticulously is a persistent urinary leakage and a pyelocutaneous fistula. Intra operative retrograde ureteric cannulation is usually not required, but is still practiced in certain centres to delineate the collecting system. The pelvicalyceal anatomy is quite clearly visible using the high definition three dimensional vision of Robotic camera.  Pyelocutaneous fistula can present   itself during the early post operative period, usually within the first week. Various methods of diversion of urine from the renal remnant can be tried ranging from retrograde double J stenting to percutaneous nephrostomy. Application of various sealing agents through percutaneous and retrograde routes has been attempted with different results (14). Frustrating persistent urinary leaks have ended in delayed radical nephrectomy.  Patience has been found to be rewarding in many cases

Intraoperative renorrhaphy must be done meticulously. It is better to put an additional suture at the time of medullary closure than to rely on sealing agents as haemostatic supports. Renal artery is a direct branch of Aorta and the pressure in its branches is high enough to defy sealing ability of haemostatic agents. Sealing agents like ‘floseal’ are useful in controlling cortical ooze that can escape closure by cortical interrupted sutures. Therefore it is considered wise to unclamp the renal artery after closure of medulla as it would not only reduce the warm ischemia time, but also allow the surgeon to ensure proper haemostasis of the vital vessels. Cortical vessels are smaller and can be controlled by interrupted cortical pressure sutures.  It is difficult to control a medullary bleeding once cortical sutures have been tied.

American Urology association guidelines 2009 clearly mention the procedure of choice for T1a and possible T1b tumours is partial nephrectomy and yet PN is poorly utilized technique in community practice (15). Robotic technology has revolutionized the treatment of renal cell carcinoma and this has primarily resulted in shift from radical nephrectomy to partial nephrectomy. This is an evolving science and is subject to criticism and scrutiny like any other evolutionary process. Current published literature is full of evidence in favour of Robotic Partial Nephrectomy and the evolution is in progress even further (16).  Future directions include development of augmented reality like haptic feedback and single port partial nephrectomy (17, 18).  In present circumstances, where robotic technology and due experience is available, anything other than a partial nephrectomy should be discouraged in a suitable case.